Antelope Dance is the second album by the Cennet Jönsson Quartet. The group´s first CD, Jazzman, was released in 2003. The music is inspired by West African and Balkan rhythms as well as Nordic jazz - surrealistic and colourful landscapes, jumping and dancing animals in a mystical unification on the Swedish savanna.The Baobop-jazztree is floating in the wind…. 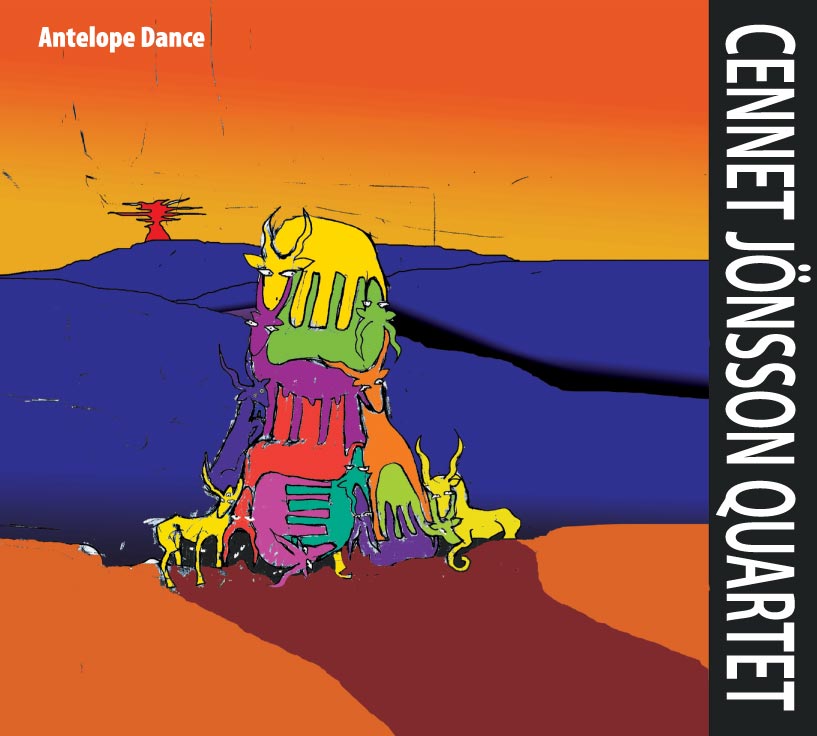 "Jönsson’s melodies are all pleasant, tonal, decidedly singable, and the ensemble handles them with grace and ease.  As the ensemble moves to the improvisation sections, however, there is a wide variety of styles exhibited... His solo on “Baobop” is angular and complex, aiming to play off of drummer Peter Nilsson’s rhythmic propulsion rather than Mattias Hjorth’s bass lines. By contrast, Jönsson’s solo on the lush ballad “Sweet Drops” is more lush than the melody itself, if that’s even possible. His lines and phrases play ultimately to the emotions, feelings and sentiment of human interaction. Hjorth’s solo is similarly beautiful.  So melodic and harmonious are his lines he never makes you think he’s a bass player. Guitarist Krister Jonsson shines on “Professor Nutty”. He perfectly matches style with Cennet on the duo’s covering of the melody and then spins out craftily oriented and rock-ish harmonic constructs during his solo. At this point the ensemble becomes a true power trio as all three rhythm section members demonstrate rock band Rush-like rhythmic influences. Nilsson drives the solo relentlessly forward and Hjorth’s bass pounds and pushes his lines to the forefront. Cennet’s following solo is just as compelling. This disc is an excellent example of just how developed and far-reaching America’s classical music, jazz, has developed overseas."- Thomas R. Erdmann/Jazzreview.com

"Cennet's soprano work is quite accomplished - bell-like, pure, with an occasional burr for grit. He can be quite notely as well - filling the musical space with accelerated runs. In that he has some of the technique of Dave Liebman. Krister Johnsson on guitar is an important voice in the group. He can comp with sense, and his soloing is in the Abercrombie/early Rypdal lineage. It’s smart, electric, spacy but in control. Hjorth on bass and Nilsson on drums form key elements of the sound. They push, hold steady and make it all swing. A Latinish seven-four Galucia gives the truth to the above. The rhythm section really kicks on Baobop, again with a Latin feeling pulse. Krister’s four-on-the-floor riff kicks Cennet to a high flight on soprano. A pretty ballad comes up next on Sweet Drops, notable for a Hjorth bass solo with Hadenesque lyricism. Cennet switches to tenor on Professor Nutty, a bright and cooking, furiously swing­ing number a la DeJohnette’s Rock-like swingtime. Krister waxes prolific in a definite Fusion mode and he sounds just great. Cennet’s tenor hits it on the nose; he sounds inspired with plenty of ideas and a great sound. Drummer Nilsson trades some provocative fours with Cennet and further shows his imaginative style. Lullaby of the Sea goes back to a ballad style. Cennet plays a lovely head and he shows he can utilize a slight vibrato without sounding mawkish. Cennet seems on the verge of establishing himself as an impor­tant voice on the soprano. The group plays a solid set and kicks the gong at all the right places. It is a very good record. I think anybody with a ear for contemporary Post-Bop with a Fusion edge will find it a welcome addition. This is a group of which I would love to hear more."
- Grego Applegate Edwards/Cadence Magazine


"Ladies and gentlemen, this might be the best jazz album of the year. Jönsson has composed seven varied and very strong pieces. They move between the sweet and tenderly beautiful to vigorously pulsating dance rhythms with a strong African influence. Guitarist Krister Jonsson adds nicely with his colourful sound-pallet. Bassist Mattias Hjorth provides embracing lines along the horizon, and dexterous and innovative drummer Peter Nilsson has a prominent spot in the mix. I’m hearing something new for once, because this is so wonderfully original and fabulously performed, that my goose bumps almost break my shirt."
- Bo Levander/Jönköpingsposten


"Cennet Jönsson has a straight, easily recognizable tone, especially on the soprano, but his tenor playing is also engaging. This is a music that’s not distracted by commercial considerations, these guys do their thing without hesitation. Thanks to the rhythmical flexibility created by Peter and Mattias, the music feels open and spacious. Cennet and Krister play dazzling solos throughout. The timbre of the group creates an ethereal atmosphere, in which the beautifully relaxed Sweet Drops is very rewarding. Here, Mattias takes a well shaped solo, accompanied by beautiful guitar harmonies. The soprano also adds to the warm atmosphere. The intensity in Professor Nutty shows that this group isn’t just a bunch of landscape-painters. On the contrary, they push it and the drumming escalates the soloists to violent outbursts. Here, Cennet let’s his tenor speak."


"Baobop is an intensely grooving piece, where both Jönsson and Jonsson take inspired solos. Bassist Mattias Hjorth plays a beautiful, melodic solo in the ballad Sweet Drops. Antelope Dance begins with a guitar riff, which turns into a subtle and funny section, hinting of Led Zeppelin’s Jimmy Page. When Cennet’s dainty soprano re-enters, the form changes once more. This album is a fun musical adventure in the jungle that’s sometimes gotten too safe and predictable."
- Jan Backenroth/Skaraborgs Allehanda

"Skåne-based saxophonist Cennet Jönsson is without a doubt one of Sweden’s most important jazz musicians. His new album, Antelope Dance, features improvised jazz of the highest caliber. Cennet mainly sticks to his soprano sax and takes a couple of magnificient solos, many of them at slower tempos, but he raises the temperature with his tenor playing in Professor Nutty, where Krister Jonsson plays venturesome guitar. Peter Nilsson is a very driving drummer, and Mattias Hjorth brings the meat out of his bass."
- Uno Ohlson/Norrköpings Tidningar

"Jönsson’s imaginative compositions have colorful structures and rhythmical variation. He is mainly heard on his soprano here, creating surreal and multi-colored landscapes. Cennet is well supported by guitarist Krister Jonsson, who paints an enjoyable sonic picture mixing conventional and innovative searching. The rhythm team, consisting of Hjorth and Nilsson completes the quartet with their spot-on interplay. Please acquaint yourself with the Cennet Jönsson Quartet!"
- Hans-Erik Bergman/Sundsvalls Tidning