Peter Danemo founded Meloscope in 2006. Their sensational CD-debut Re: Someone Lost received raving reviews and this is their second CD. For this occasion Meloscope is expanded with three fantastic musicians with successful careers in the classical world, Staffan Mårtensson – clarinet, Henrik Frendin – viola and Mats Rondin – cello, hence the name Deluxe.

The music on this CD is built around the quartet; several pieces are based on the quartet's music. The three added musicians are used to reflect and sometimes add a mirror image to Meloscope's music. The music is very melodic and free, the tonal language flows between the composed and the improvised without any apparent borders in between. 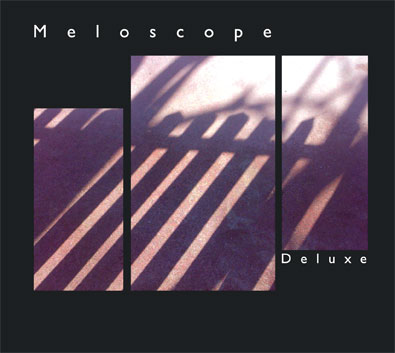 ”If Meloscope walked a line between chamber music and jazz on its first record, the added trio brings a spectrum of highly nuanced contemporary classical music to this one. The music presented here is even richer and is balanced by composed sections and the freshness of improvisation. There are moments of exquisite beauty, that can just as easily switch into a complexity that creates energy and challenging sonic images. Meloscope’s concept is very appealing and full of musical possibilities, and performed by truly skilled musicians with a deep understanding of the Swedish music scene, something that is apparent throughout."
- Stefan Nilsson/Nerikes Allehanda

”The combination of classical players and improvising jazz musicians creates an interesting mix, where the music expands and takes surprising directions. This is definitely music that’s created in the moment and has no use for limiting musical labels."
- Göran Olson/digmusic.se


"On this new album, the groups second, Meloscope is enhanced with clarinet, viola and cello. This meeting between the jazz group and the classical players is characterized by the restrained intensity heard on Meloscope’s first album, but the sound gets even more concentrated in this bigger format. The delicate vibrations from the strings sensitively communicates with Cennet Jönsson’s soprano sax, ethereally but also rawer with nice dissonances. Joakim Milder’s tenor sax balances the picture, but he also joins Jönsson in challenging the structures, while Christian Spering’s almost meditative bass playing and drummer Peter Danemo’s rhythmical imagination makes the music even more dense."
- Magnus Eriksson/Svenska Dagbladet


”The three classical performers, playing clarinet, viola and cello elevates this group to new heights. Meloscope is not making it easy for themselves, as they shift between composed and improvised music, only to suddenly add a new dimension to the music in the form of the three classical musicians, who alternately plays along with and creates a reflection of Meloscope’s music. Meloscope Deluxe is for those that has no problem giving a record more than one chance, because they know that then something will happen, something that will get under your skin.” - Niels Overgård/Jazznyt.blogspot.com