Anders: "AORTA Ensemble is essentially a joint venture between AORTA and Fulminate Trio, and this album is my first foray into "orchestrated" music. By uniting these unique groups of select improvisers, multidim-ensional music comes alive within open frames of compositional  works and free improvisations.

Ever since hearing Wayne Shorter's SuperNova  & Odyssey of Iska, and Art Ensemble of records, I've desired to assemble a band large enough to create music with parallel layers, purposefully paying attention to back, middle and foreground. T

he writing is largely sketch-like, allowing each player both individual freedom and to add to the overall picture, a formula ripe for creating drama. Alongside these jazz rarities, other influences include the 100 year old orchestral “expressionist” works of Anton Webern and Arnold Schönberg. These are pre-12-tone, and the twists of focus, density, rhythm, volume and use of "Klangfarbenmelodie" are filled with a great sense of desperation, violence and vulnerability that still grabs me. With AORTA Ensemble, I strive to create something similar, but handled by terrific improvisers. Lastly, the first piece on the album, “SoundFear”, is a homage to Bernard Herrmann." 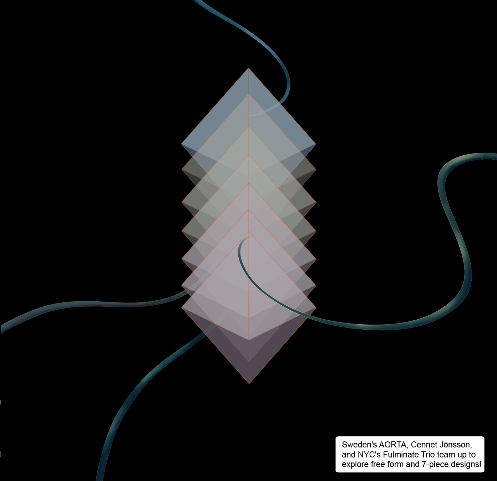 "Swedish-born, Brooklyn-based guitarist Anders Nilsson unites two of his working ensembles into his dream project. The Swedish, Malmo-based AORTA and the New York-based Fulminate Trio fulfill beautifully Nilsson's vision and create orchestral, open-ended, multidimensional, improvised music that references the great 1970s fusion bands, but with a much broader scope and liberties—and more importantly, free from the genre's notorious clichés.
The first piece, the 15-minute "SoundFear"—an homage to Herrmann's suspense filled constructions—is a slow, melancholic, and impressionistic composition that boils slowly. The rhythm section—David Carlsson on electric bass, on double-bass and drummers Peter Nilsson and Michael Evans—lays dense patterns before the ensemble forms a kind of thriller theme. "Tuning In" is a tighter piece, with Nilsson taking the lead with a powerful and exciting solo over the shouts of sax players Mattias Carlson and Cennet Jönsson. As the piece evolves, all players collectively outline a clear theme and then begin to improvise on it, including a remarkable two-bass improvisation, with the rhythm section pushing relentlessly, following Nillson's commanding guitar lead.
"Nacken" is a short and dense interlude for guitar, Carlson's flute, and bowed bass, followed by the epic 18-minute "3D," with Filiano's masterful arco solo slowly joined by Jönsson's bass clarinet, Carlsson's flute and Nilsson's guitar. This chamber-like introduction is built with nuanced tension, expressionist space and moody, cinematic feeling. When Nilsson takes the lead, he transforms the spare piece into a meditative, loose fusion improvisation with a majestic solo. The closing "Vortex" is an uplifting, muscular, collective improvisation that demonstrates the tight and fast interplay of this ensemble.
Anders Nilsson´s AORTA Ensemble features an exceptional ensemble with a clear and focused vision—a vision shared both by its leader as well by this adventurous label that keep producing fascinating documents of a new and promising generation of Swedish improvisers."
- Eyal Hareuveni/All About Jazz


"This is guitar great Anders Nilsson's dream project combining the
talents of both of his bands from Sweden (Aorta) and New York (Fulminate Trio). Over the past few years, Anders has become one of the most exciting and inventive guitarists to emerge from the downtown scene, working with Ras Moshe, Fay Victor and leading his own bands. Each performance both live and on disc has knocked me out so I was excited to hear this new combined band project. Three of the five tracks were written by Anders with two ensemble improvisations. Soundfear begins with an ominous vibe, the guitar quietly leading the  ensemble while the reeds (flute & sax) play spooky, simmering harmonies. The piece drifts and builds very slowly, the sound harkens back to the great days of 70's jazz/rock without any bombast. On Tuning In, the entire ensemble swirls powerfully around Anders guitar,  eventually hitting their stride when that great fusion groove kicks in midway. Both the blisterin' saxes and waves of basses and drums provide storm-like waves that pull us in for the exhilarating ride. 3D is an epic length piece that again ascends majestically from its stark beginning. When Anders enters with that dark, mysterious riff after 5 minutes, it sends chills up & down my spine like those nightmarish moments on the first Mahavishnu Orchestra album. The great music on this disc has the original charm of mid-seventies jazz/rock without any of the excess or cliches. This is one of the best electric jazz discs I've heard in a long while."
- Bruce Lee Gallanter/Downtown Music Gallery, NYC


"The first thing to note is that, while there is continual interplay, expressiveness, thematic development, and the like on this disc, it’s not a conventional heavily arranged septet date with solos and sectional work. Rather, these terrific pieces are spacious and a bit brooding, with tons of texture like a Vesala session recently unearthed. High praise indeed, but Nilsson’s date earns it. Very judicious with his own instrument, the guitarist has a superb ear for mood and environment, using space and silence primarily to create atmosphere but also to prevent the instrumentalists from merely blowing in customary fashion. In particular, the winds are very effective, playing frequently in ways that are airy, as if sending messages from a distance. With this kind of setting, it’s far more effective when, for example, an ominous tattoo rises in intensity for the deftly positioned noisy passages on "Soundfear." "Tuning In" opens with crashing cymbals in duet with gnarly distorted guitar, following which there are big rubbery bass grooves for a sweetly probing clarinet solo and terrific dual bass solos to close. After the cool fragment "Nacken," more twin bass and tutti voicings open the lengthy "3D." This piece has a long section of electronic menace amid the floating world, but even here—again, quite Vesala-like— flute and noisy guitar merge and part in a pairing of opposites, and elsewhere drums rumble with clarinet in the midst of thick polyphony. The closing "Vortex" is the busiest, most contrapuntal piece: a fun, noisy fanfare with the most idiomatic playing of the date. This one’s the tops. Get this one."
- Jason Bivins/Cadence Magazine (US)

"Flexible dynamics make for different moods, this is at times extremely massive, at other times held back and delicate. Melodic themes reoccur  and the free form explosiveness is given a frame with premeditated shifts. Classical music meets jazz. Tuning In is my favorite. There is a rugged blues feel in Anders Nilsson's electric guitar and Cennet Jönsson plays a fiery soprano solo. But more than anything it's cool that King Crimson-like jazz is diffusing with the distorted electric bass of David Carlsson. The 70's transported to the present. The same can be said, although with a different twist, for Mattias Carlson's flute solo in Soundfear, which feels like you're inside the soundtrack to a hardboiled thriller. The ensemble challenges itself in 3D. The piece is carried by Ken Filiano's mighty arco bass, but rather than spattering off, they keep the dynamic at a certain level. They allow details to matter in held back arrangements and sparse solos. Anders Nilsson excellently steers the ensemble into varying contexts and often lets the musicians roam free."
- Magnus Nygren/Soundofmusic.nu


"The music springs out of composed happenings but the compositions  come across as sketch like, almost sudden, like trying to capture an idea or image in the moment. The musicians then relate very freely to the picture. The music is explosive, dramatic and full of quest; Nilsson  superbly combines those dimensions in his stubborn explorations of his instrument's possibilities. Free jazz's examinations of musical elements enters a dialogue with more defined traditional touchstones, solo improvisation balances ensemble playing in spatial interplay where the relationship between the feature in focus and the background nurtures musical depth and an alluring beauty. Drummers  Peter Nilsson and Michael Evans fuel the music's rhythmic energy, bassists Ken Filiano and David Carlsson accentuate it's spatial dimension, while Anders Nilsson  together with Cennet Jönsson's and Mattias Carlson's saxes break loose in beautiful flights, or dig ever deeper in the musical soil. In a powerful suggestive way, this music combines the multidimensional possibilities of the larger group and the spirituality and physicality of free jazz." - Magnus Eriksson/rootsy.nu


"The cd opens with Soundfear. The first half of this 15 minute track is very thoughtful. Slowly and gradually this piece unfolds itself, moving towards a cacophony climax and closing as it started in a pastoral mood with a nice melodic line in the centre. In Tuning In‚ the ensemble comes quickly to business. With his rumbling electric guitar, Nilsson abducts his mates for a dazzling ride. In 3D‚ we are in the beginning for a substantial part witnessing the deep grumbling bass playing by Filiano. Only after 6 minutes, Nilsson takes over and gradually others start to communicate. What struck me the most in this release is the unusual roads along which they structure their music. There are the energetic free jazz outbursts, as in Vortex, on the one hand, and the lengthy and controlled walks on the other hand. Also the way how they play with dynamics is remarkable. It all sounds familiar in one way, but Nilsson knows how to bend it in unexpected and alienating directions. This makes this release a very fascinating and satisfying one."- Frans de Waard/Vital Weekly


"Anders Nilsson plays an exciting brand of jazz on this album, touching on progressive rock, and avant-garde classical along the way. Soundfear has a slow and spacey sound scape, slowly building with electric guitar and percussion. Strong electric guitar on Tuning In sets a prog rock like feel, then the saxophones bubble up strong and deep evoking a Miles Davis Dark Magus feel. One of the saxophones breaks free to solo with some nice drumming before clearing the decks for a very impressive bass interlude. Näcken is a short interlude for electric guitar and flute with bowed bass, introducing the epic 3D which probes the musical seascape like a sonar sending out pings of yearning guitar. The saxophones and drums take over, moving into a very cool improvised section. Vortex wraps things up with strong full band improvisation, a collectively improvised cacophony that is very exciting, led by rock influenced guitar and drums. The music the group makes is consistently interesting and exciting." - Tim Niland/Jazzandblues.blogspot.com


"The music breaks free in a manner which requires ears open towards the unexpected and new. Melodious, thoughtful passages transition powerful free jazz with dissolved regulations and form concerns. Order  and chaos in relay - this demands something from the listeners but is also a rewarding listen." - Olle Hernegren/Nya Wermlandstidningen


"When Anders Nilsson talks about this music he is referring to 40-year old Wayne Shorter albums and pre-12-tone works by Schönberg  and Webern from a hundred years ago. I'd rather mention John Coltrane's  Ascension from 1965. As you are able to deduce this is no record to check out during a coffee break. The music is partly notated with great possibilities for improvisation. At times earth shattering."
- PO Åstrand/Smålandsposten