This is The Opposite´s first album. Fresh, suggestive and unpredictable music with a wide range - the music is both grooving and meditative, complex, jagged and beautiful.

The jury´s motivation: "This year´s winner is rewarded for how they, with a fearless and uncompromising attitude, manage to combine ethereal airiness and rhythmic complexity in their driving and searching take on jazz,  as genuine and unpredictable in its collective base as in the individual, dazzling solo offerings." 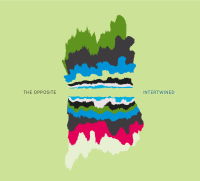 "This ensemble has, indeed, a strong and focused rhythmic identity and organic fluidity, but without the bombast excess of most fusion outfits. There is also a clear feeling of joyful playfulness, with healthy dose of humor and eccentric outbursts more typical of 's ensembles. All sextet members sound mature, possessing distinct musical voices, especially guitarist Samuel Hällkvist, who sound as if he is taking 's angular and distorted lines a step further, and the assured playing of alto saxophonist Marcelo Gabard Pazos...and, of course, the powerhouse drumming of Nilsson.
All six compositions feature complex turns and cues, without being too dense. Dequidt's "I Said Haha" is one of the most intense, featuring the sextet's tight interplay and immediate role and solo changing. The free-improv "Seau d'air" is an arresting example how a spare improvisation and distant jagged playing by Hällkvist, Paazos can gel naturally with Dequidt and Nilsson's melodic lines, later crystallizing into a multilayered and cohesive collective sound. Hällkvist's "Les délices de la mer" and the closing "Switch Foot Pogo" reference clearly Weather Report and even 's American quartet with its captivating shiny themes and infectious grooves.
This a highly original sextet, wise enough to balance form and freedom, intellect and emotion, and childish joy of playfulness, with tight and focus compositional delivery." - Eyal Hareuveni/All About Jazz

"The Opposite have a strong jazz/rock sound with great solos from their guitar, keyboards and saxist. The band name is also the name of the first track. I dig the way the electric piano and electric guitar solo around one
another intricately with the alto sax also swerving around them. I Said  Haha starts one way and then shifts as each member solos and
each solo is pretty hot. If someone were to ask, I would call this
progressive, electric jazz/rock. Their guitarist, Samuel Hällkvist, has
a unique way of bending and twisting notes, reminding me at times of
Marc Ducret. His solo at the beginning of Seau D'air is fractured
yet it starts the song off just the right way. Each piece involves a
different strategy or structure. You can tell that a good deal of
time went into composing and learning these demanding pieces which
seem effortless at times. The Opposite is an original and a most
gifted sextet. I could see them getting a great review in the UK's
Jazzwise magazine as well as doing well with the Wayside crowd. The
more I listen to this, the more the complex ideas are revealed."
- Bruce Lee Gallanter/Downtown Music Gallery, NYC


"Bang, Intertwined is a one-two punch. This sextet is playing what here in Quebec we call musique actuelle: creative, funny music built on confrontations, childlikeness, virtuosity, and byplays. Think Fred Frith or René Lussier. This is a total surprise and I’m completely won over. Discover them too!" - François Couture/Monsieurdelire.com


"Marcelo Gabard Pazos plays an abrasive and jagged alto sax… Guitarist Samuel Hällkvist also plays in an angular and lopsided way that is completely up to date and a part of the language in improvised music today. The music composed by Dequidt and Hällkvist is part of a contemporary foray that involves lengthy written parts mixed with soloistic sections. One can also recognize minimalist influences through long, repeated phrases with minute changes in phrasing or rhythm. At first glance, the music might appear to stand still, but it´s being moved forward through original and rambunctious drumming by Peter Nilsson. Exciting music and an album that OJ recommends!" - Jan Strand/OJ


"The title of their debut points and describes correctly what we hear. Especially what happens concerning rhythm and beat these acrobats weave very complex and intertwined structures. And very enjoyable not to forget! The CD opens with The Opposite that has an immediately captivating and complex rhythm, making room for nice solo work for sax and guitar. Also it is far from self-satisfied fusion. The playing of guitarist Hällkvist is one of the main forces preventing this. In Seau d'air, he opens with a mean and distorted guitar solo, making a meditative moment in the middle of the cd possible this way. Also on other moments he adds interesting twists. What defines their music most is the rhythmic complexity for which they took inspiration from the musical traditions of Cuba, India and Africa. The closing piece is one of the stronger pieces of this album. With its pushing moves, it brings this promising cd to a worthy end." - Frans de Waard/Vital Weekly


"Rhythmic spectrality and freer group improvisation characterizes the music on Intertwined. Pianist Loïc Dequidt and guitarist Samuel Hällkvist have composed most of the music, but the group has a free approach to the material. The group moves in several different directions and finds purified emotional states, from the meditative to the frenetic, from the soberly lyrical to the willfully boisterous. Excellent solos breach the rhythmical web, but the entire output is so tight that the internal tensions merge in the collective strife of the group. The dialogue contains surprising angles but finds its form in richly nuanced dialectics."


"The Opposite focus on collectivity and makes a music that feels very up to date, though still rooted in jazz from the 70´s, such as Keith Jarrett, Weather Report and Sun Ra. The totality of the collective effort is most powerful and results in elegantly crafted sonic landscapes. It is very fresh and vital, has rich musical width, as well as inventiveness. The sound of the group is complex and is, besides being based on jazz, influenced by Indian, African and Cuban musics." - Stefan Nilsson/Nerikes Allhanda


"Kopasetic usually releases albums that are genre bending and challenging. “Intertwined” is an exampel of this, with a complex and slightly jagged music that moves between meditative, airy passages, and dense, suggestive, ecstatic chunks of funky rhythms. Rock, jazz and oriental influences are mixed and presented by percussion, bass and electric piano backing alto sax and a guitar that´s often more rock driven than jazz flavored. This is music with a high energy level."
- Olle Hernegren/ Nya Wermlandstidningen


"The Opposite is a contemporary group with an unpretentious and unconventional take on jazz rock. There is experimentation, like in the collective piece Seau d'air and there are long, grooving sections, as in Hällkvist´s Les delices de la mer. The tunes are varied and places drummer Peter Nilsson in a prominent spot. He plays contemporary and dirty drums and impresses with both technique and imagination as he, aptly supported by percussionist Anders Vestergård, constantly keeps the time." - Niels Overgård/Jazznyt.blogspot.com