David Liebman is a renaissance man in contemporary music. He has played with Miles Davis, Elvin Jones, Chick Corea, John McLaughlin, McCoy Tyner and others; authored books and instructional DVDs acknowledged as classics in the field of jazz; recorded as a leader in styles ranging from classical to rock to free jazz; founded the International Association of Schools of Jazz; a multiple Grammy nominee;  inducted into the International Association of Jazz Educator's Hall of Fame in 2000; has received an Honorary Doctorate from the Sibelius Academy in Helsinki, Finland, and has been performing worldwide for over thirty-five years. He has consistently placed in the top finalists for Soprano Saxophone in the Downbeat Critics Poll since 1973.

David Liebman is featured as a guest with Cennet Jönsson Quartet on the CD KOPAcoustic. 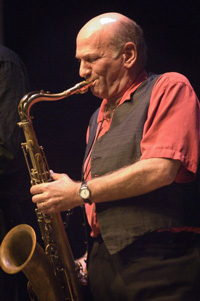