The accordeionist virtuoso Lelo Nika was born in former Jugoslavia, but  his family moved to Denmark when Lelo was one year old. His father brought him back to Jugoslavia to study music when he was ten. In that way he has become a mix of Balkan and Scandinavia. In the same way his music is a mixture of many different styles and genres.

“Lelo Nika is the best accordionist I’ve ever heard, by far”/Joe Zawinul

Lelo Nika was featured guest soloist with Cennet Jönsson Quartet
on October 12 at Victoriateatern in Malmö during KOPAfestival 2010. 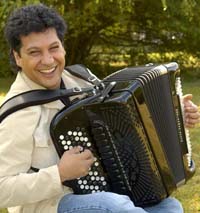