Saxophonist Mattias Carlson was born in Norrköping in 1972. He´s been into music since the age of six, starting out on drums. He started to play the saxophone at the age of ten, and it has remained his main instrument ever since. Jazz music has brought Mattias to the south of Sweden, where he has studied at Fridhems Folkhögskola in Svalöv and at the Music Conservatory in Malmö, where he now resides. He says: “ Jazz music is the genre closest to my heart, because of how it enables you to improvise and create in the moment”. The CD-debut of the Mattias Carlson Quartet was released in the spring of 2004 on Blue Beat Production . Mattias is featured in Anders Nilsson's Aorta. 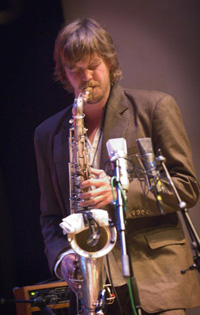