This is Readymade's CD debut. Improvised music with references to jazz, noise and ambient. The trio mixes electric and acoustic sounds, tonal and abstract harmonies and play on the tension between soundscapes and pulse. Each piece (cell) is allowed its own sculpted identity and development - sometimes the music is minimalist and based on a certain mood and sometimes it's based on a clear progression, where the patience to allow the music to naturally evolve is an important factor. 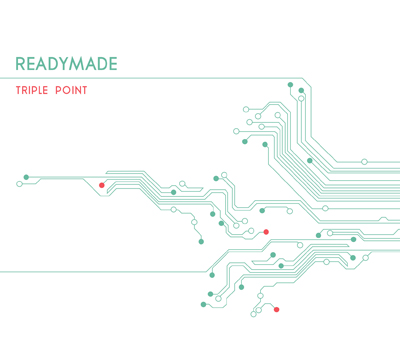 "The five improvised pieces, each titled as a cell, play on the tension between free-form, noisy soundscapes and pulse. All are colored with inventive electric and acoustic sounds, with tonal and abstract harmonies. The nature of the trio's instrumentation and patient interplay enable them to sculpt each piece with a distinct sonic identity and temperament that allows the pieces to evolve organically. The first and longest cut, the 18-minute "Cell #15" is defined with a clear progression accentuated by Nilsson's steady drum work and a slow accumulation of electro- acoustic articulations until the song suddenly changes course to a spare, minimalist, otherworldly texture. The short "Cell #12" offers a rhythmic concept structured by a series of collisions between acoustic drum sounds and electronic, concrete sounds, clouded gently with atmospheric synthesizer washes."Cell #14" is one of the best realized pieces. Its cinematic ambiance, carefully built tension and the patient, courting interplay between the distinct musicians - relaxed drum pulse, breathy trumpet blows that sound as if referencing the schools of John Hassell or Arve Henriksen and an inventive palette of electronic signals and abrupt radio voices - make this piece a highly suggestive piece, perfect for a modern dance. After the lyrical cello playing by Fuchs that defines "Cell #16" as a surprising, chamber piece, Readymade conclude with "Cell #13." It begins as a gentle, meditative soundscape but suddenly explodes with a powerful eruption of muscular drumming and mix of noises and analog synthesizer sounds. The extreme intensity brings to mind the live collaboration between electronics-wizard Kieran Hebden (aka Four Tet), drummer Steve Reid and Swedish sax-titan Mats Gustafsson.. Readymade succeeds in forming an original, inventive and versatile aesthetic of its own that calls for further experiences."
- Eyal Hareuveni/All About Jazz

"You should know the name of drummer Peter Nilsson from his work with his brother Anders as well as appearing on several other CDs from the Kopasetic label. Considering that the main instrumentation is two synths and drums, that doesn't quite sound like anything else I've heard in recent memory. Mr Nilsson is a fine drummer who always rises to occasion with whomever he plays with. His playing is often at the center of these pieces, creating a pulse or groove or stream of ideas. His playing on the first long piece has a great, jazzy, swirling groove. The electronics add or expand into the flow, spinning, bubbling, eerie somber waves. What is interesting is that much of this is tripped down. Are those radio signals, disembodied voices, distant electronic transmissions? If you are patient, those sounds expand and evolve into other strange sounds. Fascinating but on a more subdued level. The drums give the electronics a more human sound which is a good thing. Very interesting and different from most things I usually review."
- Bruce Lee Gallanter/Downtown Music Gallery, NYC