Guitarist and composer Anders Nilsson grew up in Eslöv, Sweden and early on joined a rockband. Following Jazz studies at Malmö Academy Of Music and various work as a musician mainly in the Malmö area (with Notone and others) he moved to New York City in the year 2000. In New York he is associated with the free jazz scene and other subscenes having worked with Kermit Driscoll, Sabir Mateen, Ken Filiano, Michael Evans, Raoul Björkenheim, Hamid Drake, William Parker, Roy Campbell, Eugene Chadbourne, Ras Moshe, Daniel Carter, Matt Lavelle, Angelblood, Tom Bruno, Paquito D'Rivera, Fay Victor Ensemble and many others. He has also composed film music, collaborated with dancer/choreographer Akira Kasai on "Butoh America", written guitar music for the experimental theatre play "Husbands" and at times is seen with Sebastian Schunke´s Orchestra (Berlin) or playing solo.

Blood  is the first record under his own name. He says of it: “The members of this band have all played together in various contexts for many years, so there´s a rich language, a strong musical identity and a creative artistic attitude among the four of us. This makes for our music being strong and dynamic, having lots of room for stilistic crossings and interesting musical ideas with all kinds of overtones. We improvise a lot together and employ our whole spectrum when we make music.”

"Nilsson has a very personal style and a guitar tone unlike any American jazz player I can think of." - Jochem van Dijk/All About Jazz

"Nilsson, that most uncliched of guitarists" - Bill Milkowski 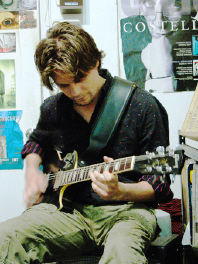