Thommy Andersson was born in 1973 in Ôrebro, Sweden.  He moved permanently to Danmark in 1995 after living in Spain on and off from 1992-1994. He has worked as professional musician since 1992 and played with many national and international artists of interest. From bop to pop, avantgarde and classical music. He also works as a composer for rhythmic and classical ensembles and arranger for orchestras and soloists. He has established himself with a warm & “woody” personal playstyle from the Swedish folkmusic tradition. Thommy has released 3 CD´s as co-leader with »The Dynamite Vikings». He has recorded more than 50 records as a sideman and toured all over the world .
He plays as a firm member with Pierre Dørge´s New Jungle Orchestra who tours the globe frequently. Beside the collaborators in Scandinavia he has toured/recorded with musicians as, Yussef Lateef, Adam Nussbaum, Randy Brecker, Café da Silva, Jerry Bergonzi, David Kiekoski, Alex Riel, Danny Gotlieb, Daniel Humair, Chris Cheek, Manolo Badrena, Lelo Nika, Harry Becket, Ulf Wakenius, Raoul Björkenheim, Rune Gustavsson, Ray Anderson, Herb Robertson, John Tchicai a.o. 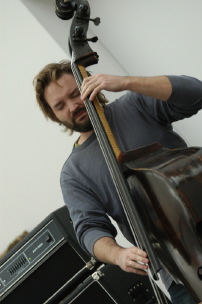