A native of Brazil, Marcelo Coelho’s music has been heard all over the places. His debut recording as a leader – Colagens – with his group MC4+ garnered high critical accl.. “Forging into a new and exciting rhythmic landscape, Marcelo Coelho breaks new ground with his group on this recording. This is just the beginning – I look forward to further development of the group’s sound along with the leader’s future compositions” says saxophone and educator giant David Liebman. A graduate of the University of Miami, he earned a Master’s degree in Performance and a Doctor’s degree in Composition, the later at Campinas State University, Sao Paulo, Brazil, while focusing extensively on polyrhythmic improvisation and composition: he can be heard regularly performing on tenor and soprano leading his musical projects: MC4+, MC&RD 4teto, 4teto.ORG, Tabla Jazz Quartet 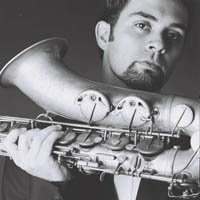