A strong and beautiful debut by the quartet David's Angels. Eight songs by singer Sofie Norling and pianist Maggi Olin. The music contrasts between angel-like and brutal sounds. The lyrics are about belonging, sorrow and letting go. 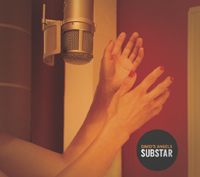 "It is a beautiful eight song-cycle focused on troubled relationship—belonging, sorrow and letting go—that travels into a deeply emotional and sonic journey. Norling has a clear, warm, angel-like voice that can soar into the upper registers, and always suggests close intimacy. Olin, together with Danish drummer Michala Østergaard-Nielsen, electric bassist David Carlsson and guest trumpeter Ingrid Jensen embrace and stress Norling vocal qualities with a soft and gentle base that assists the singer in exploring the various shades and colors of her feelings. This melodic envelope assists Norling in delivering her sober and painful insights about love gone wrong.
In the opener, "My new me," she concludes with the heartbreaking observation: "I cut off my old load," and, as Jensen joins in, the melody becomes distorted to reflect the turbulent breakup. The slow, rhythmic "Falling" reflects Norling's conflicting emotions about falling in love too hastily, and the ensuing regrets. Norling manages to summarize formative life-experiences such as loss and letting go of a love in few short and haunting sentences on "Substar," and on the most beautiful and sad "Ambition." Olin, Østergaard-Nielsen and Carlsson's minimal, ripple-like touches only emphasize the restrained drama in Norling's vocal delivery.
All are inventive musicians: Olin with her hypnotic, melodic framework; Carlsson with distorted guitar effects on his bass guitar; Østergaard-Nielsen with dynamic brushes work; and Jensen with her distant, muted trumpet. Both "Stay for a while," with its strong melody from composer/guitarist Torben Waldorff, and "Too much" reflect the beginning of the letting go process. Norling concludes this impressive journey with the dissonant "Faceless," where she regains confidence in herself, and mourns the new, almost physical distance from her former partner on "Closer." - Eyal Hareuveni/All About Jazz


"Trumpeter Ingrid Jensen guests on this fantastic CD from Sweden... composer/pianist Maggi Olin and vocalist Sofie Norling create feelings that bring on nostalgia attacks for me... that's not a "bad" thing, either... truly talented players who are able to use music to help the listener focus in on feelings.  In fact, the world definitely needs more music like this... there's no rushing here, both the vocals and the instruments are in no hurry, & before the title track is done, you'll experience some rushes of emotion, either as Déjà Vu, or concerns for the future (of us, of our planet & of the universe in general).  Just check out the lead-in track, My new me to hear what I'm talking about... this music is cosmic in scope... certainly not "background music" (for any party I've been to, anyway)... the vocal on this one makes it worth the purchase of the CD, to be sure.  The favorite track (for my ears) was Stay for a while every player is right "in touch" with the singer, and the recording is crystal-clear.  This one gets a MOST HIGHLY RECOMMENDED from me, with an "EQ" (energy quotient) rating of 4.98 (nearly impossible for a vocal CD to get here - yes, they're that good)." - Rotcod Zzaj/zzaj.freehostia.com


"Norling's bewitching voice is the pulsing, trembling heart of the music on Substar. Its first track, My New Me (a haunting Olin composition with words -- and dark, abstract scatting -- by Norling) Jensen's muted, processed horn adds more mystery and contemporary feeling.
Indeed, the disc's eight tracks are rich in evocative timbres and sounds. Olin plays mostly Fender Rhodes to contribute bell-like chords that hang in the air, but she adds piano and organ as needed. More often than not, Jensen runs her horns through electronic gear. Drummer Østergård Nielsen projects a decidedly naive vibe -- it sounds as if she's playing not only drums but also "found" instruments. At the same time, much of the disc projects minor-key melancholy, although there are variations on that larger vibe, from the trippy, staccato playfulness of Falling to the rumbling urgency of Ambition. The highlight for me is the pristine track Stay For A While." - Peter Hum/Ottawa Citizen jazzblog.ca


”Good Scandinavian female singers do not necessarily come from Norway! This is proved by David’s Angels on the CD ”Substar” with the angel-like voice of Sofie Norling, who absolutely has superstar-quality." - Rainer Bratfisch/Jazz Podium (DE)


"It is not a mistake, her voice really is an instrument. It’s not just about Norling sometimes switching from traditional vocal to scat. Sofie, as a real instrumentalist, handles all the range of her voice, from low to the highest notes and vice versa. At the same time David’s Angels
create very grim, tense but emotional atmosphere with their music. This impression is also created by lyrics about people’s emotions, sound effects, keyboard plays and hypnotic rhythm of bass and drums supporting Norling’s voice. The band’s music is based on the minimalism principles but also includes improvisation. I’d rather call their style emo-jazz, meaning the famous music style which gave the name to one of the teenager’s subcultures."
- Leonid Auskern/Jazz-Quadrat Magazine (Belarus)


"From the land that brought you suicide, death metal and downer image laden films come some new arty death jazz where it takes developed chops, pares them down with minimalism and gives you something to revel in for those down time times.  Haunting stuff that is sure to haunt you when you least expect it." - Chris Spector/Midwest Records


"Their music reminds me of sadness and softness, the desire to get the listener a close, intimate contact. The songs talk about love, grief, fear of loss and desire to experience the emotional feeling of togetherness. "My New Me" and "Falling" are slow, simple, emotional, love songs."
- Jouko Kirstilä/jazzrytmit.com

"The singer and composer Sofie Norling has written all the tracks. So everything revolves around her voice. The songs build more of an atmospheric quality, rather than melodies in the foreground, but sometimes shines through a pop flair. Especially in the instrumental passages, the accompanying musicians allow more experimental sounds of small eruptions from the pleasing tapestry of sound and then have a technical sophistication hinted that lets the vocals of Norling far behind. David's Angels play polyhedral, atmospheric jazz without borrowing from soul and funk. - Michael Freerix/Jazzdimensions.de