American singer Scott Stroman and Swedish saxophonist Cennet Jönsson have collaborated for more than 15 years in many different constellations. In 1997 they released their CD ”Project 1” during a Scandinavian tour. Scott and Cennet have also toured all over  with drummer legend Billy Cobham in the group NorthbyNorthwest and performed with bigbands, choirs, symphony orchestras etc.

This time Stroman and Jönsson have assembled an international top group consisting of musicians from five different countries. New melodic and rhythmically complex compositions inspired by music from all over the world are presented on this new CD. 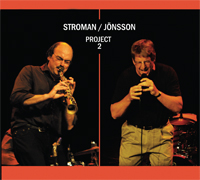 "This is a type of musical project that I rarely see these days.
The ethnicities of different countries and parts of the world meet, and new roads to new places are created. American singer and composer Scott Stroman join forces with Swedish sax player Cennet Jönsson. Together with friends from a number of different countries, they make music that soars on melodic clouds and caresses my ears. Stroman often uses his voice like an instrument in a way that reminds me of Brazilian artist Milton Nascimento. Everything is so well put together that you're just delighted. Jönsson´s tones on both soprano and tenor sax are like newly polished crown jewels. I take off my hat to great art."
- Bo Levander/Jönköpingsposten

"Neither quite traditional Jazz nor Free Jazz, the music has a few novel features, notably the use of Stroman’s voice instrumentally on several tracks. Of course this has been done before (most notably in my memory by Norma Winstone with both Azimuth and Kenny Wheeler’s big band) but it’s a relatively rare practice, effectively done here. Although not traditional Jazz as I mentioned, the tunes are very much chord-based and the soloists tend not to wander too far from the prevailing tonality. There is also a violinist who adds another distinguishing element, especially on the Indian-flavored introduction to "Man in the Moon." The musicianship is of a high quality and both co-leaders acquit themselves admirably with Jönsson serving up several convincing solos and Stroman showing his vocal flexibility in both "instrumental" and "lyrical" modes. The tunes are quite accessible and although they are not exactly groundbreaking, pieces such as "New Peace" and "Everlasting Song" display some real invention. This is a very listenable CD that proves one does not have to alienate one’s listeners in the search for creative alternatives to either Free or standards-based Jazz. Recommended."
- David Kane/Cadence Magazine (US)