The Opposite: In Action

This is The Opposite's second album, a follow-up to their award winning CD-debut "Intertwined". "In Action" was recorded live during a Swedish tour in late 2011 and illustrates how the group's intricate music sounds and evolves face to face with an audience - spontaneity, power and groove all at once!

Order the CD at Music Row! 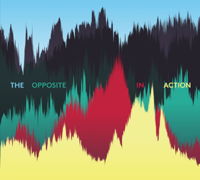 "The Opposite investigates improvisation and interplay through a collective group sound and open approach, assimilating elements of rock and Indian, African and Cuban musical traditions. In Action documents this Swedish sextet live on a Swedish club tour in 2011. The live setting enables The Opposite to emphasize its formative influences, including early fusion bands like Weather Report, trumpeter Miles Davis' '70s groups—even keyboardist Sun Ra's eccentric Arkestras, through expanded improvisations.

The main composers are guitarist Samuel Hällkvist and pianist Loïc Dequidt. Hällkvist's fierce guitar playing pushes the sextet into stormy and muscular interplay on his "Switch Foot Pogo", through rapid shifts of dynamics and rhythms while still keeping an accessible groove. The lyrical "The Big Grab" is more reserved, possessing a cinematic narrative where the guitar acts as a troubled hero amid peaceful scenery.

Dequidt's compositions offer intricate and colorful textures. "Gods & Goods" and "Can't It?" swing lightly around engaging themes, allowing each musician to contribute nuanced solos to the powerful and rich collective sound. The pianist's "I Said Haha" features unpredictable and dramatic transformations in the dynamics and pulse, until it reaches a muscular and boisterous eruption. The group improvisation, "Seau d'air", folds patiently as an arresting story, slowly adds more sounds and colors to the spontaneous plot until it crystallizes its theme.

The Opposite operates on several levels, referencing its influences while offering fresh, open sonic textures, moving through multilayered and complex dynamics, and stressing accessible and emotional themes with a genuine band identity." - Eyal Hareuveni/All About Jazz


"This bands remains an impressive jazz/rock sextet. "Switch Foot Pogo" has a cool, somewhat funky, elastic, spastic yet infectious groove. It has an electric Miles-like vibe at first and then suddenly the tempo is doubled and it jumps into a hyperdrive. "Gods & Goods" has a fine, laid back, somewhat funky groove with inspired solos from the guitar and tight electric piano interplay. There is a tight, exuberant quality that runs throughout this disc. It sounds quite a bit like some mid-seventies jazz/rock but with none of the problems of fusion, no fast licks or showboating. On "Seau d'air", the sextet take their time slowly building and creating much suspense without any solos involved. This fine disc ends with a lengthy piece called "I said Haha" which again shows a strong, more restrained side with some long, tasty, sly guitar and sax solos and an overall simmering, hypnotic vibe. Another excellent offering from the fine folks at Kopasetic."
- Bruce Lee Gallanter/Downtown Music Gallery (NYC)


"Hällkvist's and Dequidt’s compositions seem to be in direct filiation with Fred Frith’s or Jean Derome’s, i.e. lively avant jazz full of bright ideas, occasional yearning melodies, and lots of virtuoso playing. The ten-minute “Can’t it?” is a tour de force." - François Couture/Monsieurdelire.com