»Project 1» was recorded in 1997 on a tour in Sweden, Denmark, Finland and Estonia.

The CD is released on the English label 33records, www.33jazz.com/ but can also be ordered from this site. 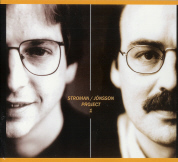