Double Standards was formed in 2002 and consists of Cennet Jönsson-saxes, Jacob Karlzon-piano, Hans Andersson-bass and Peter Nilsson- drums. The group interprets standards in a very unique way employing everything from rubato versions to hard swinging jazz! Creative initiatives are being nourished, musical depth , seriousness and humour is being mixed, everything performed with a twinkle in the eye and a big smile!
This is the first album by Double Standards. The follow up, volume two,
was released in the spring of 2006.

"...this Swedish quartet has arrived at its own formulation. Rather than original compositions, the quartet's approach is through the original treatment of jazz standards. These are well-known compositions, whose outlines surface long enough to be recognized, but which are gently de-constructed through the ruminations of pianist Karlzon and saxophonist Jönsson. "Long Ago And Far Away" is a case-in-point, the melody emerging briefly within Karlzon's introduction only to disappear beneath his Paul Bley influenced improvisation, appearing again, briefly, after Jönsson, who has listened to Steve Lacy as much as to Garbarek, has had his way with it. "I'll Remember April" is given a slow ballad treatment rather than the up-tempo romp afforded it by the average jazz players, while "United," one of Wayne Shorter's less well known compositions, is more of a brief motif that launches lengthy improvisations from both Karlzon and Jönsson, here heard on his only tenor outing of the date.

These are talented performers who have listened to what is going on in contemporary jazz but are giving it their own unique perspective. Their take on abstraction is fluid and graceful, and, above all, extremely musical. "
- Peter Westbrook/Jazzreview.com

"The tunes are being performed in nicely relaxed, rolling tempos, with a high level of musical communication, vast dynamics and in an open, more unrestrained style.." "The debut  "Volume One" is one of  the best jazz albums of the year, and makes me long for the already recorded
follow-up "Volume Two" .."
- Martin Erlandsson/Hallands Nyheter

"The result is brilliant." "..unusually listenable and consistent music, "exciting and original, sometimes cheerful and sometimes just beautiful, even very beautiful. Like in the finishing piece I'll remember April. To me this is the Swedish record of the year– so far."

"..seven standards, executed with considerable care and a
distinctive interpretation and displaying a very high level of intelligent communication between all four members of the quartet.".."This is altogether a truly relaxed and relaxing album, though not without musical excitement. It rolls along with a refined, unfailing and undulating energy that has left me waiting for Volume 2. "
- Ken Cheetham/CardiffJazzSociety 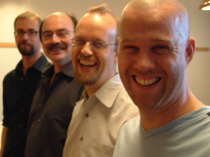