Sweden/New York based band Anders Nilsson's AORTA's second cd "Janus" offers further inspired riffage, hard-core blowing, imaginative writing, and edge-of-their-seats improvisations, all handled with great interaction and dynamics. While in part focusing on electric sounds, the band's scorched voice is delicately balanced by tender moments of purity. As the title Janus indicates this disc is many-faced and full of wonderful contradictions. It includes several viewpoints and approaches to the band's playing their heart out. All this packaged in cool cover art! 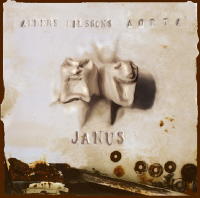 "..Aorta sound as if they are storming out of the seventies before fusion became a predictable set of cliches. This quartet is heavy with strong electric guitar and sax interplay and inspired soloing." "This is one powerful and tight quartet with some wonderful writing making it even more special and unpredictable." "You just never know where you will end up, except for great surprises. On a few of these pieces the quartet lays back and gets into some fine moody areas - hushed, dark and cerebral." "Considering that it is only January, I know that this fine disc is bound to be one of the year's best under-recognized gems."
– Bruce Gallanter/Downtown Music Gallery

"Aorta´s music has gained a lot in depth, due to the more elaborate stylistic diffusion of the compositions and the broader emotional scope of the collective playing and improvising." "Nilsson´s carefully crafted compositions seem to dissect the music most closely ingrained in his and bandmates´ collective subconscious." "..elements are bundled into a vehicle for relentless improvising, in greater doses and with much more collective audacity than your everyday jazz release." "..Janus gets more and more captivating by revealing ever-changing shades of depth and wonder, bewilderment and moods—just like, well, life itself. A small monument of brutal honesty from a band with a future." "..the band creates a lot of excitement, and it should be tomorrow´s festival act for an open-minded audience."
"Art—sometimes it's just that simple."
- Jochem van Dijk/All About Jazz

"This is unruly underground music, intentionally unpolished, performed with both engagement and a quirky smile." "Angular metal riffs meets improvisation with a free jazz attitude." "It feels like the Malmö-based bands´ identity primarily is the way it creates collages of different influences."
- Alexander Agrell/Sydsvenskan

"..the meeting with their music is an overpowering experience. Such power in this many-faceted music that just spreads ahead at full speed. The electric sound predominates but in the improvisations, space is opened for more nuanced sections. The song Harlem Space reeks of heavy blues and Sloughing is marvellously cacaphonic."
- Uno Ohlson/Norrköpings Tidningar

"The musicians are not afraid of balancing the beautiful and the challenging. This goes for the group sound as well as the melodies. Fiery cascades of notes can be superseded by a beautiful bluesinfused ballad in the next track." "..exciting and nice to hear a band that dares standing up like this."
- Jan Backenroth/Skaraborgs Allehanda

"It starts furiously." "It sounds slightly chaotic but the music is well structured in its associative leaps." "And the delicious chaos in Sloughing, like a homage to 60´s free jazz, is an elegant contrast to the meditative streak in the collective improvisation Unmasked. In this way the expression and styles are crossing one another, but everything is superbly reshaped in a creative and groovy mix - or stone crusher."
- Magnus Eriksson/Lira