"Refreshingly Addictive" is the third album by Plunge (their second as a trio). This CD was recorded in front of an audience in Gula Studion in Malmö in January 2007. The music, which is still improvised, also indicates how Plunge´s music has evolved over the years, it includes more counterpoint and has become more minimalist than their previous work. 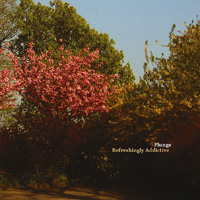 7. None Of The Above

"The sequence of albums shows the trio gaining confidence in themselves and each other, as they gradually strip away the extraneous, unearthing and burnishing the core of their musical personalities. The resulting music is very exciting, introducing drama into the cerebral and keeping the listener within a recurring cycle of anticipation followed by resolution. Although Andersson is the natural leader due to his instrument, Nilsson and bassist Matthias Hjorth do not simply react, but instead surround Andersson with an elastic sound field that allows any player to take the lead. The first, and title track is a complete example of the band's real-time methodology, the high level of group interaction that has been achieved and the coherence created over time.
The group sound - anchored by the Nilsson's huge cymbal splashes and gong hits, and Hjorth's close listening to Nilsson - is both mysterious and exciting, allowing Andersson to go where he wishes. This is music making of the highest caliber, and it's possible to hear the spontaneous being manipulated with a constant eye peeled towards creating structure, all in real time. Andersson once again keenly balances the free, the melodic and the tonal, and the tension/release dynamic created by the band is wonderful, creating the perfect bookend with the title track. Creative improvised music does not get much better than Refreshingly Addictive." - Budd Kopman/All About Jazz


"The Swedish trio Plunge has been together for six years now, and
their collective experience shows on this live recording. Expectations
that this will be a Free Jazz session full of fire music from baritone, bass, and drums are quickly subverted by Andersson, Hjorth, and Nilsson. First off, while the tunes are all spontaneously improvised, there are lyrical structures throughout. The trio excels at mining that free lyricism, pushing the music with a simmering urgency while maintaining a decidedly relaxed edge. Then there’s Andersson’s tone. Sticking to the high end of the bari, he often sounds more like a tenor player, though there is a husky edge that always comes through. Bass players are one of the keys to a great reed, bass, drums trio, and Hjorth fills the role effectively. He provides a melodic counterpoint to Andersson’s baritone while playing off of drummer Nilsson’s free pulse. He plays with a laid-back, supple sense of phrasing and time coupled with a warm, woody sound. Drummer Nilsson plays with a limber, light touch that catalyzes the music without ever overwhelming. His willingness to lay out and leave space for the others shows power through restraint. Throughout, the improvisations open into sections for duos and solos, effectively showcasing each of the musicians as both soloist and collaborator. This release is further proof of the strong Jazz scene in Sweden."
- Michael Rosenstein/Cadence Magazine


"The opening Refreshingly Addictive demonstrates the spirit of the recording: slow and patient exploration of a spare theme. Andersson leads with a relaxed, simple melodic line that slowly gains more volume, but he does not opt for loudest, while Nilsson and Hjorth consolidate and color his blows. Chant, Kind Of Askew and Moveable are even more restrained, spiritual and minimalist, with the trio drawing the skeletal, fragmented lines of these lyrical pieces. Nilsson turns the shortest piece here, Involvement, into a subtle and nuanced solo suite for percussion. The longest piece, the almost eighteen-minute The Zürich Effect, alternates between long, spare and lyrical passages - where the pauses in the playing are equal to the playing itself, where each note and gesture counts - to shorter and more investigatory mode of collective improvisation - though still patient and even slow-motion - all in beautiful interplay. Nilsson demonstrates, again, how he can color and mutate the character of each piece with his sensitive and inventive touch. Andersson searches for the lower registers of his sax, adding a soft vocal quality while Hjorth skitters with his bow. Andersson's rare extroverted playing on the closing None Of The Above, lightly references the playing of Swedish baritone hero Lars Gullin, but the trio uses this piece as a dramatic conclusion for this impressive set. On this release, more than on previous ones, it is clear that Andersson, Hjorth and Nilsson are trying to reach deeper and more mysterious terrains, perhaps just by following Andersson's spiritual and humble playing."
- Eyal Hareuveni/All About Jazz


"Definitely refreshing and probably addictive too. The atmospherics (imagine Sweden in the middle of winter) are deep and fantasy-like. Extreme restraint in the opening title track with Andreas Andersson on baritone sax demonstrating a mature passion and rich sensitivity leading the soft, funky bass and drum (with added gongs) on a thought provoking eleven and a half minutes. A sensitive artistic synergy continues with an added lyricism through into Chant and Askew hints tastefully at a genre known in some parts as jazz. Peter Nilsson opens with shaking shells on Moveable allowing the sax to deliver a melancholic monologue which in turn allows the bass (Mattias Hjorth) to open right out and the three engage in deep conversation. Involvement is my favorite piece - a beautiful, understated, gently rolling, rich drum solo making me want to pick up sticks. The Zürich Effect at a healthy seventeen and a half minutes allows for some serious listening as this session really got into the swing of timeless, effortless experimentation; all credit to an attentive audience whose obliging presence can almost be felt through some of the most minimal and introspective moments, the playing remaining superior and clean throughout. The strength of this album lies in it's sensitive colours and the almost primitive, non-technical approach from these excellent musicians who are clearly capable of great skill. But like the sleeve in it's slightly psychedelic photo of a road apparently stopping abruptly at beautiful bright pink trees, there has to be a point where technical prowess gives way to the point of pure appreciation and admiration. The last note says it all."
- Jonny Drury/www.freenoise.co.uk


"The result is just as relaxed as it is focused, and this is the groups´ strongest effort so far. Slow-paced pieces with restrained forms, rarely painted in loud colours, are being playfully improvised. Baritone saxophonist Andreas Andersson visits some mysterious terrains and manages to avoid predictable discoveries better than before. He digs deeper into the notes without getting gloomy. At the same time, he is strongly supported by bassist Mattias Hjorth and drummer Peter Nilsson, who are both also in a sparse mood."
- Magnus Olsson/Svenska Dagbladet


"Air, devotion, and slow paces give the music on "Refreshingly Addictive" its shape. Saxist Andreas Andersson, bassist Mattias Hjorth and drummer Peter Nilsson allow the listeners to breathe in sync with the music. Fragments of melodies submerge, are examined and disappear only to resurface again. Andersson's baritone is sincere and lyrical, actually hinting of Gullin in spirit! I like music that breathes, and Plunge's music really does." - Tor-Björn Lyrhed/Linköpingsposten

"Praise to patience!" "I am fond of this method and also the courage it takes to stick to the plan throughout the 70 plus minutes on this album. On top of this, Andersson's baritone playing is very lyrical with a beautiful tone. The delicate and receptive interplay between the 3 musicians is also delightful to follow. In the midst of this slowly flowing stream, paradoxically there is an urge and an intense spirit."
- Jan Strand/OJ

"Malmö based Plunge has made a name for themselves on the Swedish improvisation scene over the last few years and this, their third release, is a good testimony of why. With Andreas Andersson's near plastic baritone sax in focus, the trio springs into the unknown in seven improvisations that sound more like lyrical minimalist compositions than traditional free jazz. Mattias Hjort (bass) and Peter Nilsson (drums) does not make up a rhythm section in the traditional sense either. Rather, organically fused parts conspire from all three players and the group's music not only is unusually succinct and passionate, but also demonstrates that you actually can find new paths within the paradoxically rather narrow frames of free jazz."