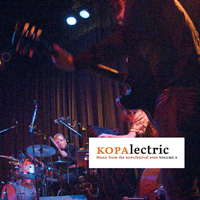 "This fabulous disc features three ensembles recorded live at the same
festival in Malmö, Sweden in September of 2006: Marc Ducret + lim,
Anders Nilsson's Aorta and Elektra Hyde. Marc Ducret plays on the
first three 10-minute pieces with LIM. "Gettin' Tage" opens with some strong swirling playing, a spacious interplay between Ducret's guitar and Frisk's tenor sax. Mr.Frisk wrote all three pieces for LIM and Ducret fits in just right. "Nephilim" is slow, eerie and filled with suspense. Both Ducret and Frisk take some great understated solos. I really dig Frisk's
writing, his tunes have a unique way of unfolding slowly so that each
note counts like the words in a story. Marc Ducret takes another of
his amazing twisted (blues/noise/jazz) guitar solos on "Shulaffel"
that just makes me feel so good. Swedish guitar great, Anders
Nilsson, has been living and playing in NY for many moons but still
fronts the great Swedish jazz/rock quartet Aorta, who have two great
discs out on this same label. Aorta performs a colossal 21-minute
piece called "Riding the Maelström" on this disc. Starting with a
spirited solo electric guitar intro, the quartet launch into a
powerful, tight guitar and tenor sax (Mattias Carlson) led storm.
Fusion fans take note, this quartet wails and sounds like some of the best fusion bands of the seventies without resorting to any of the usual clichés. Anders takes an amazing guitar solo here that must be heard to be believed. The third band, Elektra Hyde, is quite different than the other two here. Although they use regular instruments like guitar, trumpet, bass and drums, they all also play electronics. "Elektra" hovers with spacious electronic soundscapes. Staffan Svensson, sounds like Jon Hassell or Nils-Petter Molvaer, with his effects/echoes added to his trumpet sound. This piece deals more with textures and space and is interesting..."
- Bruce Gallanter/Downtown Music Gallery

"lim offers some well crafted and energetically performed music like Getting’ Tage, that engages saxophonist Henrik Frisk with Ducret’s complementary but opposing guitar accompaniment. A deep-throated, burly sound, Frisk plays the dark, piquant theme of Nephilim with authority and extroversion that would magnetize listeners with its haunting ways. Elektra Hyde is another story. It is totally involved with electric creation of soundscapes and moods, wherein even Staffan Svensson’s trumpeting receives electronic enhancement. With extended drones and sonic layering, Elektra Hyde’s Elektra suggests strange wonders with cinematic imagery of beeps and drips and shimmers (like a walk through, perhaps, Sigourney Weaver’s [Ripley’s] Nostromo before horrifying action occurs) rather than musically stating a logical process through sequential exposition. And finally there is Anders Nilsson’s Aorta, which plays a sustained 20-minute set of exclamatory improvisation, even bluesy at times when alto saxophonist Mattias Carlson inveigles, that includes a devotion to the electric guitar... With the luxury of time, Carlson develops a long, intriguing statement that contrasts with the resulting blasted theme of lunging force. Instead of the characteristic calmness and introspection of many of ECM’s recordings, the musicians of Kopasetic show no reluctance to state their exciting influences from rock, classical music, electronics and Jazz. All of those influences form a combination shared by the musicians who performed at the festival and are represented on these two albums."
-  Bill Donaldson/Cadence Magazine