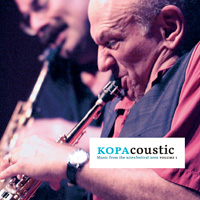 "The KOPAfestival in 2006 was a mélange of genres, including fusion and Third Stream played by Liebman and some of Scandinavia’s finest musicians. The cut “So It Seems” has Liebman, on soprano, and tenor man Cennet Jönsson in well-coordinated wailing and honking in the upper register. Krister Jonsson’s take-no-prisoners electric guitar, with its distorted echo effect, gives the tune a deeper feeling, especially over drummer Peter Nilsson’s gnashing. Liebman doubles on flute and soprano for “The Eve”, an East Indian-influenced epic; Liebman and Jönsson’s highpitched sopranos sounding like two birds shouting in the trees. Every small flourish enhances the collective improvisation, building vivacious dialogue." - Terell Kent Holmes/All About Jazz


"A special guest appears within the acoustic performances in the person of David Liebman, who joins Jönsson’s quartet on two of the final tracks. A gracious guest, Liebman plays a colloquy with Jönsson on The Eve, on which spur-of-the-moment interweavings between tenor and soprano saxophones set the feel for the rest of the piece, peaceful enough with bursts of unexpected energy, before the rest of the group comes in. So It Seems, which precedes The Eve on the CD, is freer and replete with surprises as every member of the quartet is engaged, first in a naturalistic rhythmless call and response and then in broader tones and calmer statements, sustained and dramatized by Peter Nilsson’s texturous drumming. However, the musical excitement continues in the other two groups’ performances as well. The Krister Jonsson group’s blossoming first composition, Introvut, supported by harmonic underpinnings consisting of Nils Davidsen’s electric bass and Jonsson’s guitar, presents the remarkable Svante Henryson on cello delivering the piece’s gorgeous theme as it washes over the listener. But Davidsen’s vamp that follows on Zenith proves to be irresistible as it grows in volume and speed, no doubt invigorating drummer Peter Danemo before rock-like fury ensues, allowing Jonsson no doubt to thrill the crowd with his extended solo. Henryson appears again to deliver an affecting interpretation of Jonsson’s Cloudy Sunny, a serene and quiet composition, in that respect like Long Way Home which concludes Jonsson’s set. The third acoustic group is Footloose, which too is free but with less melodic or harmonic content than Jonsson’s quartet. On Footloose’s Zone III, guest saxophonists Lotte Anker and Andreas Andersson, like Liebman and Jönsson, respond to one another as ideas spontaneously develop throughout its 18-minute performance."
- Bill Donaldson/Cadence Magazine

"This is the second fine disc that we've reviewed from the Kopasetic folks and their annual festival. The Krister Jonsson Trio Plus is up first and features Krister on guitar, Svante Henryson on cello, Nils Davidsen on electric bass and Peter Danemo on drums. The haunting cello and
somber electric guitar play their tender swirls up front while the rhythm team play quietly underneath. They soon get into a sly, laid-back but rocking groove. Krister plays a great, slow-burning near-fusion guitar solo on the second piece that is followed by an equally dynamic cello solo. For their last piece, they slow things down to a lovely song with some quaint cello and delicate guitar playing. Svante takes a lovely cello solo on the final song for this fine quartet, as does Krister on his exquisite guitar. Footloose features Lotte Anker on alto sax, Andreas Andersson on soprano & bari saxes, Mats Holtne on guitar, Mattias Hjorth on bass and Peter Nilsson on drums. Their one piece is long and evolves organically. This is a particularly strong improvised piece with inspired playing from all five players. Both saxes and el. guitar move in tight orbits around one another while the great rhythm team uplifts and ascends upwards. The final Quartet Plus features Dave Liebman & Cennet Jönsson on saxes, Krister Jonsson on guitar, Mattias Hjorth on bass and Peter Nilsson on drums. They begin with some strong and intense double sax (soprano & tenor) free intro, but then get into a more restrained section with a superb acoustic bass solo, sublime John Abercrombie-like guitar solo and distant sax sighs. The final piece is a fine, dream-like piece for spinning soprano saxes and flute and soon takes off on a Trane-like double sax journey. The rhythm team is in fine form as the guitar and two saxes spiral magically together. Guitarist Krister Jonsson takes a dynamic jazz/rock solo and the entire quintet sounds supremely inspired throughout. It is a most perfect ending to a consistently great disc of some of Sweden's best musicians."
- Bruce Gallanter/Downtown Music Gallery