”Origo” documents the continued collaboration between Plunge and piano great Bobo Stenson, it is Plunge’s fourth album and their second together with Stenson. The rewarding collaboration between the trio and Stenson began in the fall of 2002, and has so far resulted in numerous tours of Sweden, several national and European radio broadcasts and a CD, “Plunge with Bobo Stenson”, which was released in 2005.

The music on “Origo” is improvised and based on intense listening, spontaneous composition and a far reaching sense of form, and it is clear how the quartet’s music has evolved over the years – the pieces are longer, more elaborate and more minimalistic. The new record features a wide spectrum of sounds, textures and moods – from intense and suggestive grooves to beautiful ballads and sparse and sensitive interplay, and is a good example of contemporary, Scandinavian jazz – music that’s an extension of the strong Nordic tradition of creative, personal and challenging jazz, a tradition that Bobo Stenson has been a big and important part of since the early 60’s.

Origo is also available at cdbaby.com and can be purchased at Downtown Music Gallery, NYC! 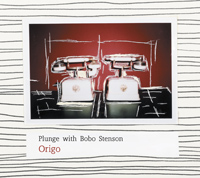 "This excellent trio's fourth release presents them at their best. The core group - Andreas Andersson on alto and baritone saxes, bassist Mattias Hjorth and Peter Nilsson on drums - always opts for patient, spontaneous improvisation that highlights slow development of form and structure upon fiery bursts of free playing. The collaboration with Stenson enriches both sides, and enables this ad-hoc quartet to delve into more elaborate pieces. Some tunes are much more minimalist—almost abstract, yet still intense. Stenson is much more adventurous than on his ECM releases, while retaining his elegant touch and sophisticated articulation. Origo is a multi-layered session that features the quartet's various facets. Spare and suggestive on Clement, Stenson delivers ballad-like lines, but Plunge Trio's sensitive interplay only touches them, opting for a more open texture. The title track is slow and minimalist, with careful, balanced and emphatic interplay based on intense listening. Metamorphing, at almost 20 minutes, moves through a wide and introspective—almost meditative—spectrum of textures and moods, with quiet intensity and delicate thematic elaboration. The closing Wee Farewell is another spare, contemplative piece that sums up this impressive musical meeting in a majestic manner. The patient interplay implies moods and themes in an imaginative game of nuanced and suggestive playing. This release is a wonderful example of contemporary Scandinavian jazz. Plunge Trio with Bobo Stenson extends the Nordic tradition of cool, personal expression, challenging conventional jazz with a unique and creative improvisational method. Origo asks for an attentive listening, but each listening finds new and captivating nuances that testify to its sheer beauty." - Eyal Hareuveni/Allaboutjazz.com


"While "Origo", a wondrous album not to be missed, stands on its own as engrossing music that captivates from its first notes, those who follow Plunge will immediately recognize it as both a document of the group's development and a synthesis of their last two albums, Refreshingly Addictive and Plunge With Bobo Stenson. The group has always emphasized free improvisation, but here it means spontaneous composition. Each piece is replete with themes or thematic phrases that are declaimed, developed, refracted and otherwise used as its kernel. While saxophonist Andreas Andersson (alto and baritone sax) and Stenson are naturally in the foreground, with their interplay being the most obvious, bassist Matthias Hjorth and drummer Peter Nilsson exhibit an extremely high degree of musical empathy. Indeed, the music's attraction lies in how freedom, structure and development are balanced. While not being tonal in terms of key, or even modal, each piece does have a center of gravity defined by its phrase kernel, which is fleshed out by Stenson's pithy chordal clusters. Development feels logical while being unpredictable, as each player's contributions (both pro- and re- active) move the piece forward. Furthermore, each piece has a mood, the sum total of which puts the album on the introspective and meditative side, combined however, with an underlying intensity borne of concentration and the lack of anything extraneous. Origo seems to simply unfurl before the ears in a timeless way, paradoxically demanding attention while simultaneously ignoring it. Alea Iacta Est opens "Origo" and is the "hottest" track, echoing in that way Lingua Franca from the 2005 album. The triptych of Origo, Giordaniesque and especially the nineteen-minute voyage that is Metamorphing dominates the album and defines its artistic rigor. Origo is multilayered music for immersion, creating a perfect excuse for the repeat button and hours of becoming lost in its spell. Marvelous." - Budd Kopman/Allaboutjazz.com


"Although this music is completely improvised, it often does have that sublime, spacious Scandinavian vibe. The opening track, Alea Iacta
Est, does have that sparse, fiord-like Nordic drift so common to ECM records in the mid-seventies with Mr.'s Stenson & Jan Garbarek.
On Clement, Bobo's playing is hushed and haunting with some fine drifting alto sax from Andreas Andersson. Stenson plays with a
ballad-like elegance throughout, the rest of the quartet also floating lyrically along with him. Metamorphing features some exquisite baritone sax, dreamy bowed bass and spooky piano. This piece is nearly 20 minutes long and unfolds organically. There is an oasis in our mirage that seems to soothe us gently at first. This entire disc has a rich, lush aura that feels like we are being massaged softly but steadily. Ommmmm..." - Bruce Lee Gallanter/Downtown Music Gallery, NYC 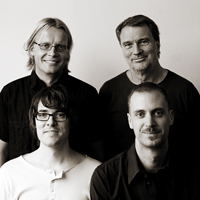