lim with Marc Ducret documents the continued collaboration between lim and French guitarist Marc Ducret. The collaboration was initiated during KOPAfestival 2006 and has since continued on and off. Parts of the 2006 performance is also featured on the CD KOPAlectric. This new album is the quartet´s first studio recording and was recorded live in front of an audience in Gula Studion in Malmö, Sweden during two nights in November 2010.

lim´s music stems from a committed and long-term group effort that was initiated over 10 years ago and this recording also clearly shows that the group´s music continues to evolve and that the core has become more crystalized. Despite the complexity of both the compositions and the interplay, lim & Ducret manages to create music that is both organic, original, dynamic and engaging and feels personal, vital, creative, challenging and urgent. This recording is an honest artistic offering
and marks a new take-off for the band in it´s quartet version. 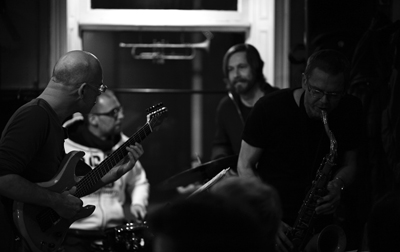 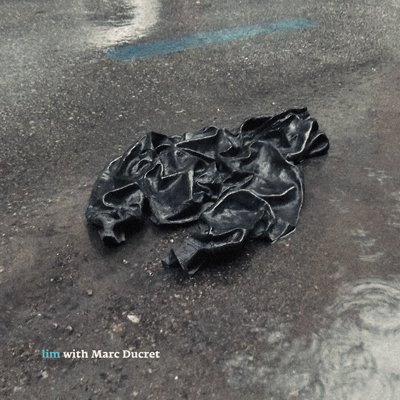 2. My Flower, Your Power

Recorded live in front of an audience at Gula Studion, Malmö by David Carlsson on November 28-29, 2010. Mixed and mastered by lim at Château Burlesque, Malmö. All compositions by Henrik Frisk. Produced by lim.

"lim first collaborated with Marc Ducret during KOPAfestival 2006 and has since continued on and off—a perfect match. The Copenhagen-based French guitarist's thorny, intuitive and unorthodox style of playing—incorporating different influences and genres—sits well with lim's open dynamics and the urgency of its playing. Recorded live in front of an audience in Malmö, Sweden during two nights in November 2010, the creativity of this musical summit is also evident in the names of its six compositions. The opening "How Yellow Can This Be?" refers to the color of the solar plexus chakra (Manipura), introducing Ducret to lim's organic manner of developing a structure with a telepathic communication amongst its members. When Ducret begins soloing, he charges lim's energy with extra doses to expands its sonic possibilities. The open-ended "My Flower, Your Power," reaffirms the quartet's established chemistry in its surprising turns and boundless energy. "The Pointer" refers to the last Swedish parliamentary election, when a nationalist-racist party was elected, described in the liner notes as, "a step towards an ignorant and anti-intellectual society and solidarity." It is an ironic, loose blues, led first by Frisk, and later joined by Ducret, who takes the tune to more open, distorted regions. "The Tranebird," one of lim's favorite tunes, written over fifteen years ago, is another open-ended tune, built on shifting rhythmic layers. This promising collaboration concludes with an ironic reference to the film This is Spinal Tap (1984) with "How Black Can It Be?," summarizing the affinity, vitality and flowing creativity of these four gifted musicians in top energetic form."
- Eyal Hareuveni /All About Jazz

"Saxist Henrik Frisk wrote all six of the songs here and has done a swell job of providing challenging changes to work with. How Yellow Can This Be? is a deceptively laid back piece with the sax and guitar playing long written lines which unfold organically while the rhythm team sways tightly underneath. Mr. Ducret takes the first of numerous sly and crafty guitar solos, each well worthy of thoughtful consideration. Mr. Frisk has a distinctive way of writing slightly skewered harmonies for the sax & guitar to play together complementing each other in their own bent way. In some ways, this is inspired jazz/rock at its best but not really fusion since it never deals with speed or any of the usual fusion cliches. Henrik Frisk is also a fine tenor saxist as each of his solos proves, a perfect foil for Mr. Ducret. The rhythm team is also consistently creative and supportive. A truly great disc that never hits you over the head but slides into your consciousness in mysterious ways."
- Bruce Lee Gallanter/Downtown Music Gallery (NYC)


"Creative jazz that draws inspiration from fusion jazz through a detour in Scandinavian jazz. Though enjoyable throughout, things kicked into a higher gear starting with The Medallion, followed by the uplifting The Tranebird with a strong Ducret solo and How Black Can It Get? where the saxophone steals the spotlight."
- François Couture/Monsieurdelire.com