A Double Standards performance focuses on shaping the music of composers such as Cole Porter, George Gershwin, Miles Davis and Wayne Shorter, in a very personal and expressive way. The group was formed in the fall of 2002 and consists of:

The quartet has toured all over Sweden and Denmark and has been broadcasted on Swedish National Radio on several occasions. Double Standards was featured at the KOPAfestival 2007 in Malmö. 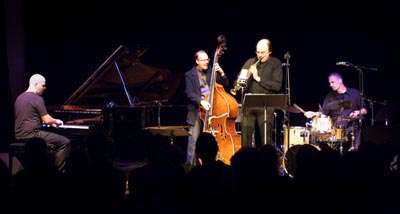 Double Standards's third album "Live!" is out now!
Also check out "Volume One" and "Volume Two" !