The group was formed in 2001 as a trio. New member Anders Banke, one of Denmarks most interesting players today, blends naturally with the original trio and makes a strong contribution with his expressive playing on tenorsax and bass clarinet.

Un-x-pected Pleasure released their second album, "Informal Talking", in 2007. The CD consists of intricate and varied compositions mainly by the visionary composer and guitarist Mats Holtne.

The music that ranges from highly energetic to deeply poetic imposes great demands on the musicians. Mats Holtne and drummer Anders Vestergård, now longtime collabarators and original members, along with bass player Mats Ingvarsson are deeply involved with polyryhtmic themes and creating musical landscapes and structures. 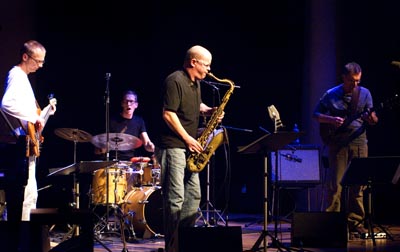 The group has performed in Sweden and Finland and was featured at the Jazz Festival in Padova, Italiy  in 2004 and at the KOPAfestival 2007 with Irish saxophone star Michael Buckley.