- Newly composed original music by the leader and free improvisations  in a wild and unblushing mix performed by an unorthodox quintet.

Check out animated movie Base Three and Triple Bass Fantasy live on YouTube!

The group made their first concert on February 27 2008 at La Couronne in Malmö.

Triple Bass Fantasy were featured on October 4 at Mejeriet in Lund during KOPAfestival 2008 and performed in Lunds Domkyrka on November 23, at Alvesta Jazzclub on January 17 and at Babel in Malmö on April 28 2009. Tour Schedule for 2011:27/4 - KOPA at Kong in Malmö, 1/5 - Dunkers Kulturhus in Helsingborg.
. 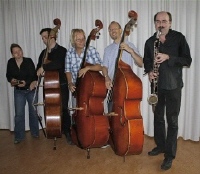