Plunge consists of saxophonist Andreas Andersson, bassist Mattias Hjorth & drummer Peter Nilsson and was formed in 2001. The group focuses on collectively improvised, acoustic music, and their music is based on interplay, presence, spontaneity and a far-reaching sense of form. Plunge has toured in , 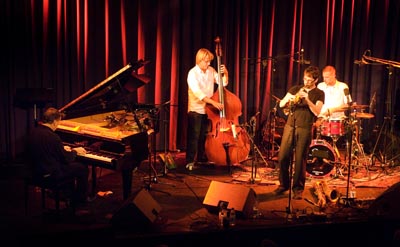 Besides working as a trio, Plunge also has an ongoing collaboration with renowned Swedish pianist Bobo Stenson. The rewarding collaboration between the trio and Stenson started in the fall of 2002, and has so far resulted in numerous tours of , several national and European radio broadcasts and two CD's, "Plunge With Bobo Stenson" (2005) and "Origo" (2009).

You can read more about Plunge at www.myspace.com/plungetrio, where you also can listen to a couple of tracks.