In the fall of 2007, French pianist Loïc Dequidt formed a new quartet, featuring the Scottish sax star and a Swedish rhythm section of the highest caliber. He composed new music for this occasion and the group made a tour of Sweden and recorded this album.
Loïc Dequidt Quartet is :

This new quartet is something of a dream team for Dequidt, and the four members really found each other musically from the very first moment. Their music combines the energy in jazz and Nordic airiness. Each composition has its own story and influence - from Gipsy and Ethiopian music to Scandinavian jazz - and it might be a good image of Dequidt´s own musical personality as of today.


This CD is also available through iTunes Music Store and at cdbaby.com 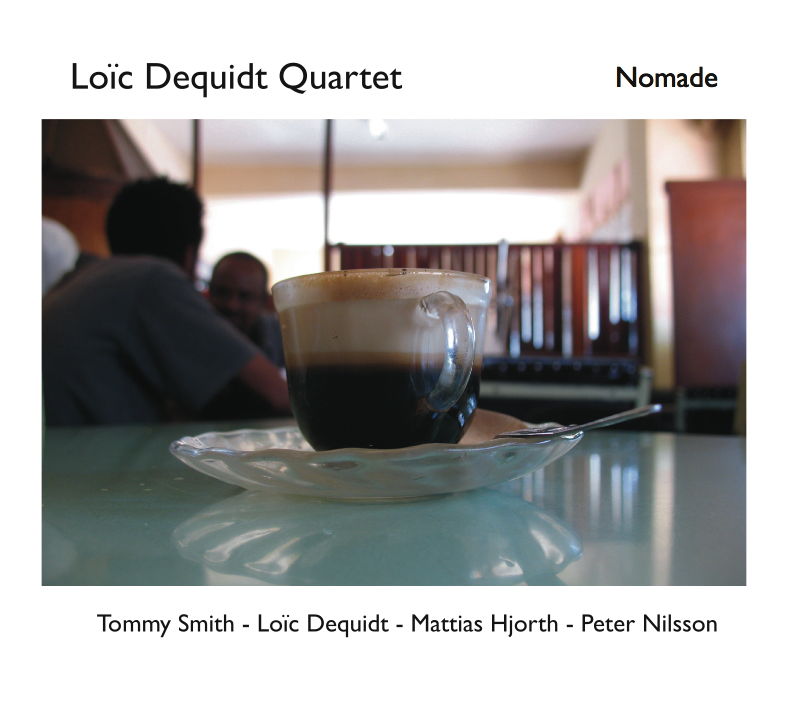 
"Although it has the lineup of a regular acoustic Jazz group, the music has more of a Progressive Rock edge with some melodies that lurch and step warily instead of move forward. Nomade and Final Play are both notable for the way they creep along with Tommy Smith’s tenor sax moving slowly alongside leader Dequidt’s prickly piano. Harris Tweed is more straightforward with Smith barreling rhapsodically over a fluid, rolling rhythm. The dark Amhara has Smith playing strongly over turbulent piano and Nordique seems to be an impression of a thunderstorm with Dequidt as the first tinkling raindrops, drummer Peter Nilsson as distant thunder, and Smith as a howling wind. Overall this is music that knows Jazz traditions but doesn’t feel bound to stay within them. It is also helped by the presence of Tommy Smith, a powerhouse sax player."
- Michael Steinman/Cadence Jazz Magazine


”Smith wanders between the light and sensual and the hard and heavy. Behind him, Dequidt weaves his chords on the piano, light as a feather, aptly supported by the rhythm team of Mattias Hjorth and Peter Nilsson. Dequidt uses the inspiration he’s gotten from different types of music, including gypsy, Arabic and Nordic music, in his own writing. He mixes it up and has created a musical world of his own. He’s free and curious and possesses a musical individuality that makes him and his quartet well worth listening to.” - Mats Palmqvist/Lira


”The quartet presents a tight and moving interplay, with improvised sections that shows understanding and sensitive listening among the musicians. Nordique feels like a collective meditation that can take any direction it wants. The quiet Final Play features restrained dialogues between Dequidt and Smith, while Harris Tweed is a robust, straight ahead piece. The compositions are used as springboards for these skilled and creative improvisers.”
- Olle Hernegren/Nya Wermlandstidningen


”Record of the week.” “Nomade features pianist Loïc Dequidt, who is as interesting as he is original. Dequidt’s music is hard to categorize, sometimes it sounds like Monk and Satie simultaneously – cheeky, unpredictable and beautiful. Saxophonist Tommy Smith is in many ways similar to Dequidt – he’s also pleasantly unpredictable. Behind them, we find the tightest rhythm team imaginable: bassist Mattias Hjorth and drummer Peter Nilsson. You’d probably have to cross the to find more solid and sensitive support. The music on Nomade is varied, and solely composed by Loïc. Original ballads are mixed with up tempo pieces, and the result is very compelling.”
- Jan Olsson/Skånska Dagbladet


”Dequidt’s playing is impressionistic and created with inspiration from such diverse sources as Ethiopian and gypsy music. The two Swedes, Hjorth and Nilsson, are among the most in demand Swedish musicians, and for a reason – their understanding of, and ability to enter into Dequidt’s thoughtful compositions is exemplary. While listening to the album, one can definitely sense some Nordic inspiration, like in Amhara, but there is also added some warmth to the Nordic coolness.”
- Niels Overgård/Jazznyt.blogspot.com


”The titles of Loïc Dequidt’s albums describes his music very well. On his trio record, Layers, the music consisted of layers that were either intertwined or contrasting each other. On his new release, the quartet album Nomade, the music wanders more freely. Even when Dequidt persistently repeats a reduced phrase, as in Final Play, there’s a spacious openness to the music. Saxophonist Tommy Smith moves between the meditative and the hard bop-heavy, but constantly in nuanced harmony with Dequidt’s seeking piano figures, Mattias Hjorth’s sensitive bass playing and the open rhythmical approach of drummer Peter Nilsson. The music mixes diverse elements into a deeply individual entirety."