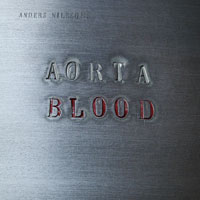 1. Blood Of The Soul

"Out of Sweden comes new jazz sounds from guitarist Anders Nilsson's group Aorta, a group that glances briefly back at the late '60s and '70s, then forges ahead, showing some possible directions for the music to go if it is to remain vital."  "Aorta has its own fingerprint, thanks in large part to Nilsson's twisting compositions. The guitar and horn work is aggressively virtuosic and the rhythm section demonically driving." "If there's any music that can even remotely be called jazz and has any chance of capturing the ears of teens and twenty-somethings, this is it." "Blood is garage jazz at a high level. "
- Ty Cumbie /All about jazz

“The music is at times gloriously noisy, head-banging jazz, with moody, tension-filled atmospheres interspersed to heighten its passion and gravity." "The front line often engages in lively interchanges, as the powerfully dynamic rhythm team churns and coasts with a foreboding sense of doom."  "This is not a “Sunday afternoon record”; rather, with this much variety, Blood is sure to keep the most attention-deficited folks busy."
- Jay Collins/One Final Note

"It's a delight following the band's imaginative and voluptuous hunt for new ways of expression. There are clear relationships to Jimi Hendrix, Miles Davis, John Coltrane, and Frank Zappa, but "(Anders Nilsson's) Aorta" trail their own path and comes up with healing originality wherein the open stream of sound is uninhibited and filled with exquisite sensitivity."
-Knut Johansson/Helsingborgs Dagblad

"The music is fierce and bypasses the brain in order to strike directly at solar plexus."
- Martin Erlandsson/Hallands Nyheter

"A fine-working group and a very fun album where the energy of rock blends into a jazz context in a way that we haven´t heard in a very long time!"
- Jan Strand/Orkesterjournalen 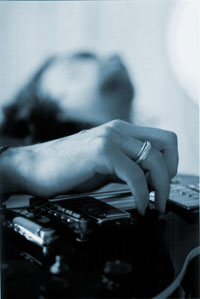 Anders Nilsson during the recording of »Blood»
Photo: Ninja Agborn